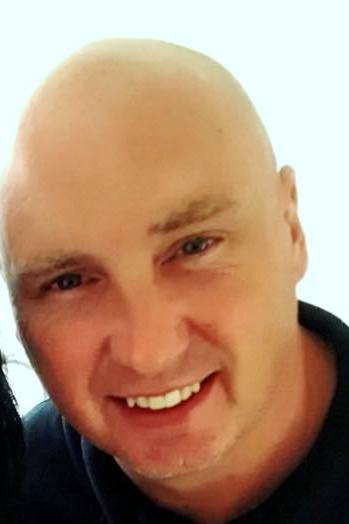 I saw a FB advert and I felt a calling. It resonated with me because of my own childhood experiences. Because when I was a boy, there was a taboo about getting help. Mental health wasn’t talked about in the same way as it is now. It was a sign of weakness. I filled out the online form and they invited me to go on a Beyond The Hero weekend. So I signed up and it changed my life.

How was the Beyond The Hero weekend for you?

It really was going into the unknown. Over that weekend, I was suspicious, vulnerable, lost and confused. But for me the magic happened. I was able to connect to deep dark shades of grief and abuses in my childhood that had never been unlocked before. I really leapt into it all. And I came out a different person.

My wife didn’t recognise me, she thought an alien had landed. I was making cups of tea and doing housework that I never normally did. There was a transformation.

I grew up thinking that men shouldn’t have feelings and that speaking out wasn’t right so it was a huge liberation and change.

What was your grief linked to?

It was grief over the violence that I’d witnessed as a child and also experienced. And majorly to do with an incident where I was wrongly accused of assaulting a girl at school. We were doing PE and a girl literally ran into me and hit her nose on my shoulder. I was playing football in a PE hall and she ran into me then went crazy. My shirt was torn and it looked as though I’d done something but it wasn’t true. There were other kids there who said I was innocent but their statements were ignored. I was found guilty wrongfully and had to change school and be called names like wife beater.

Processing this life event was huge for me. I’d been carrying it round in a heavy bag way ever since.

I was able to express so much anger which was great for me and afterwards I cried for a week. All that enabled me to feel my joy in life.

How was your Homecoming ceremony?

Powerful. It’s great to be witnessed and celebrated by a community of men. They

Why did you sign up to be a mentor?

Because I truly felt it was my calling. I felt what I’d suffered as a child would be useful when dealing with young men now. And it really is. The key for me was staffing the weekends. It was incredibly powerful to facilitate and support young men through the process. I really saw the healing happen from the outside looking in.

What did you learn from being a mentor?

For me, when I mentor I get to be 100% authentic. I learnt about boundaries and not to overreach. Mentoring keeps on re-energising me.

How has it been for the young men during the pandemic?

I mentored two young during the pandemic and they said they felt as though they’d been heard. There have been a lot of emotions flying about – including anger, frustration. I share my own vulnerability with them first, and that allows them to open up.

So much deep stuff has come up during this time. It’s been really important to do. The word they use the most about the pandemic is that they’ve felt overwhelmed. And isolated. And depressed because no-one’s listening to them.

I always see myself in their journey. I also hold the hope for them. Mentoring also helps me reflect on my own life. For example, their anger and frustration might make me reflect about me own frustrated reactions in life like slamming down the lid of the computer.

At the end of sessions, they say they feel lighter. And I’m so happy they’re emptying their bags of concrete. They’ve come a long way.