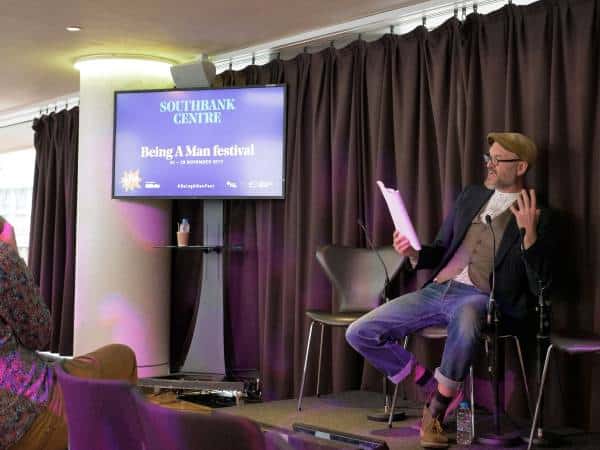 Mark Nightingale reports on his experience of giving a 15 minute Bite at Being A Man, the South Bank’s annual festival.
On Friday 24th November 2016, I gave a talk at the Being A Man festival in London. I was invited to speak for 15 mins about Abob and what we do. 15 mins is very short time to explain our activities but I decided to take up the challenge. I spoke about initiation and its importance posing the question – ‘It’s often assumed that when a woman bleeds she becomes a woman.so when does a man become a man?’
I used the opening two chapters of Parcival to illustrate some of the issues that face men and our culture with a focus on the importance of fathers for our children. Then, I posed another question – Who is supposed to teach men to be men? The resounding answer from the mixed audience was Men! We then had a healthy conversation around this. The 15 mins turned into 25 mins very quickly and the organisers had to bring it to a close. We were just warming up. There was a lot of interest in what we do and a sense in the room that it is very needed.
I left feeling proud to have been entrusted with the task of representing our organisation/movement. I believe we bring much needed solutions to some of problems our culture faces.
This website uses cookies to improve your experience. We'll assume you're ok with this, but you can opt-out if you wish. Cookie settingsACCEPT
Privacy & Cookies Policy