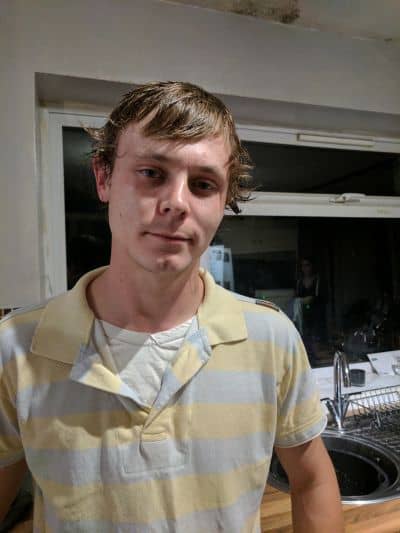 What attracted you to abob?
I liked the structure of the weekly meetings. I went to a couple of those before I did the Quest. I’d already been to NA but I couldn’t get along with it because it’s based on Christian beliefs. Abob has a spiritual dimension re nature but there’s no big Almighty in the sky.

Tell me a bit about your background?
I didn’t have a bad upbringing, I just started hanging around with much older boys when I was young. So I grew up early for my age. I was selling drugs at 12 and that lasted for 10 years.

When were you first arrested?
When I was 20, I got a call and there was a PC at the other end at my flat. I was selling everything from ketamine to cocaine. I was arrested but nothing really happened. I moved back home – I’d moved out at 18 – but I carried on selling drugs.

When did you give up selling them?
When I was 22, I was charged with six different counts of supplying a quantity of drugs and although I didn’t go to prison because by that time I was a heroin addict myself and the courts took that into account ie that I was selling to cater for my addiction, I got 140 hours Community Service and a suspended sentence. I knew if I did anything wrong, I would have to go to prison so I stopped selling.

Did you work as well?
Yes, I’ve been a roof tiler since I was 14. It wasn’t really the money that caused me to keep on selling drugs, it was the buzz of the lifestyle.

What about your heroin addiction?
I gave up on my own. I didn’t get on with NA.

How was the Quest?
I thought it was very useful. I think it’s a good idea that they don’t tell you what happens beforehand because you’d just think it was ridiculous. It helped me view things differently, I got a new perspective on my life.

How were you afterwards?
I was upset because I was thinking about friends who had died from drugs overdoses and seeing that I had a responsibility towards others if I was selling drugs. I’d never seen this before, I just thought I was hurting myself by taking drugs, and that other people would have sold it to them if I hadn’t. But after The Quest, I saw that if I sold drugs, I had a responsibility in this chain of events, even if the drugs that I sold didn’t directly kill my friends. I saw my role differently.

Does if feel different having a community of men around you?
Yes, I’m aware that there’s always someone at my back and genuinely there, they don’t have an ulterior motive. If I’m not feeling good, there is always someone in the abob community to talk to.

How do you find the weekly meetings?
Very helpful. I can talk about what’s happened to me in the week, and there will be other men with different perspectives.

How did it work out with your mentor?
Really good. We used to have breakfast together at the weekend and chat. He was great.

Has being in abob changed how you feel about your future?
Yes, I’m making a plan for my future. My girlfriend and I are saving to buy a house, and I want to start my own business plus I’m sorting out my health problems.