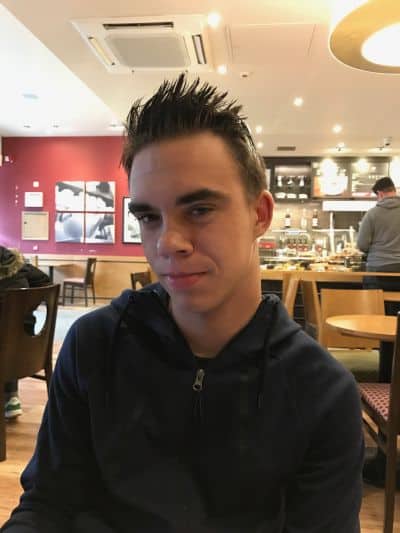 How did you find out about abob?
Through probation. They said they had a good mentoring scheme but I didn’t have a clue what abob was about at that point. Although probation did say that it was good for getting things off your chest!

Could you tell me a bit about your background?
I was put in the care system at the age of two when my parents went to prison. My three brothers and two sisters were there as well. I was adopted at 4 and everything went well until I was 15. In fact, I got on with my adoptive parents like a house on fire, I felt very loved by them.

What happened when you were 15?
I found out that my biological dad had died when I was 12. My adoptive parents had decided not to tell me. But I lost the plot altogether at that point, I was so upset.

What did that look like?
I kept getting into violent confrontations at school and my ADHD got a lot worse. If someone annoyed me, I’d go for them. I kept getting arrested. On one occasion, I drew a knife on someone who gave me some abuse, I was arrested and sent to a secure children’s unit for a month.

And after that?
They found me a place of my own but I couldn’t cope, I started self-harming and carrying knives and fake firearms in public. I got put in a youth offending centre and then on probation. And that’s when I started to change.

Why was that?
I got sick of being arrested and I knew it was having a bad impact on my 13 year old brother so I wanted to sort myself out.

So abob came along at the right time?
If it wasn’t for abob I’d be locked up or in a box in the ground.

How was the Quest for you?
I was worried because I didn’t know anyone there. There were 30 random men I’d never met before. That was hard. You really have to trust them and that was hard for me. I felt as though my life was in their hands but gradually I started realizing that these men were truly there for me, and would listen and support me at every twist and turn along the way.

Did you learn anything expressing your feelings there?
I learnt to control my anger and I realized that behind the anger is a lot of sadness. For me, the focus was on my past and what had happened to me, so I felt very sad about that. It was good to express it. And it was very difficult to do.

How did you feel afterwards?
I felt like a different person inside. In a good way. I felt like a changed person. I could speak to people that I’d never been able to speak to before. I discovered my self-worth.

How was it with your mentor?
It was difficult but good. I kept on going. It was hard to talk but I did it.

And what about the weekly meetings?
I still go to those. They are very useful. I can express stuff that I can’t elsewhere. These men are always there for me and that makes a huge difference.

And have you staffed yourself yet?
Yes, I’ve just done a Quest weekend and I want to do a lot more.

Earlier you said you would be locked up or in a box in the ground if it wasn’t for abob, what difference do they make to your life?
These men are there for me whenever I’m having difficulties. I’ve never had that before. I feel different because of it.

How do you see your future?
I see my future as very positive but not sure where it’s going take me but I guess it’s down to me and whichever way the river flows.