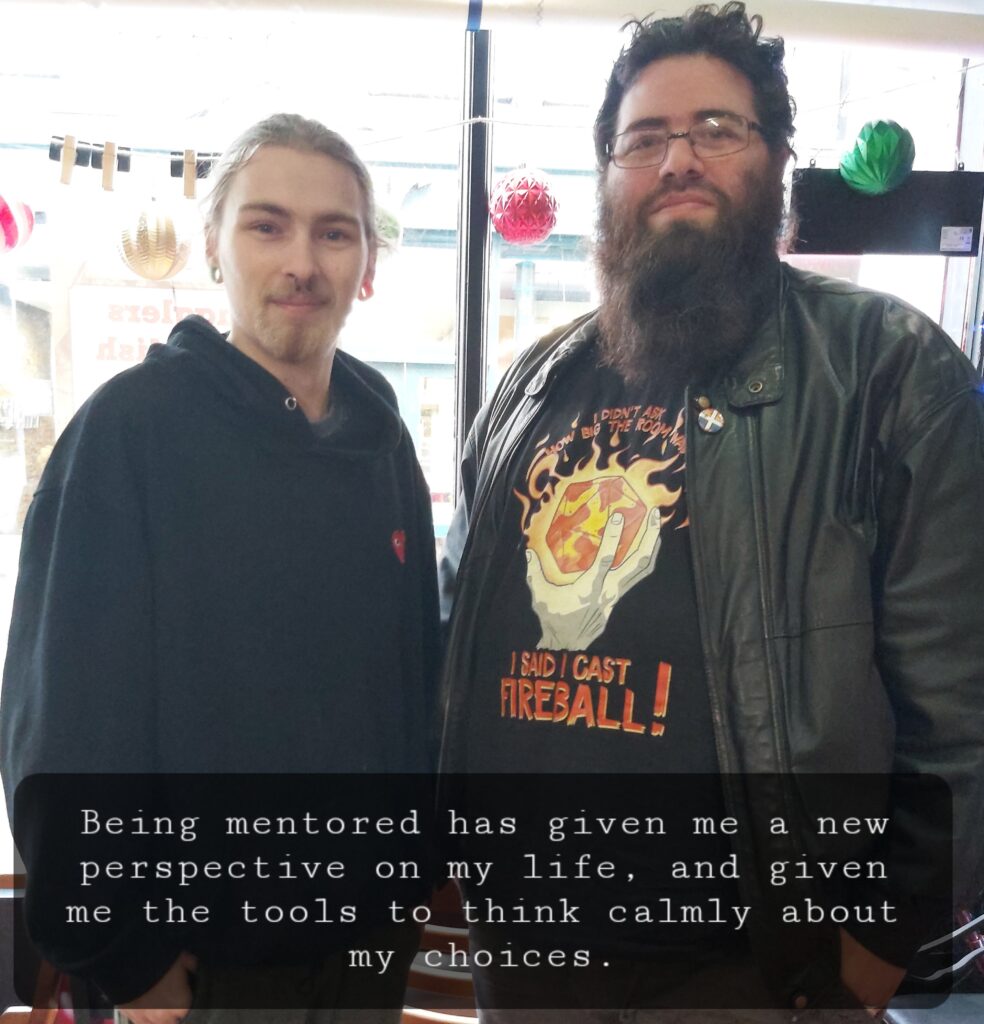 I was in a Fatherhood Support group in Cornwall called Remembering our Roots which was a big deal for me in the first place. I have mental health issues but I never imagined myself in a Fatherhood support group. Anyway, it did prepare me for abob and James who ran it was part of abob, and spoke so passionately about it I decided to give it a try.

Why did you join abob?

Really to work on myself and get support. I’ve had Bipolar Disorder since I was eight or nine and CPTSD since I was eleven. My wife had developed psychosis, our 15-year-old has autism, and we have a hyper 4 year old, things were very difficult, often I wanted to end my life. I considered myself a terrible father and husband and that I was adding to the burdens of the family.

Due to a spine injury, I am unable to work, and this impacted on my mental health, my self-worth, and my confidence. I felt useless and hopeless.

And you mentioned a transformation?

Yes, I’d been taking prescription drugs every day of my life since I was 12 and because of abob, and the emotional work that I did on myself through abob, I have been able to stop taking medication for my mental health. I still have depressive slumps but I don’t let them affect me like I used to.

Abob and being involved in abob has also given me a purpose. I can’t work because of my physical health, I’m prone to falling over and need to be free to sit down or move about as my back demands, but I can now mentor which I love doing. And it makes me feel as though I’m doing something useful, supporting young men in all sorts of difficult circumstances.

How was your Quest weekend?

Very difficult. The way I grew up, I really did not trust men. So I found 40 men in a group terrifying. Fortunately, James was staffing the weekend which gave me some reassurance and I kept saying to myself – ‘I can do this.’

It was a huge weekend for me. I dealt with the death of my first daughter who died while she was still in her mother’s womb. I was only 16, my pregnant girlfriend and I had a row, she ended up taking a baseball bat to her stomach and my daughter died. I’d never really dealt with it or grieved. It was just so terrible.

I’d had a drink problem from when I was 13 but I gave up on my own as preparation for having a daughter. Her family blamed me and never told me where my daughter is buried, which made it impossible to begin to grieve.=

I held all of this inside all this time, I had a lot to deal with. Through abob, I was able to truly grieve. I cried so much I lost my voice for five days. This was the beginning of my transformation, being able to express my feelings. Hardly anyone knew about this daughter before that.

How were the weekly meetings for you?

It was such a different experience for me because I trusted this group of men. This also helped me get in touch with my emotions because I felt safe. We hugged. These were men that were not going to beat me up. The love and support that I received was so beautiful.

Did you have a distrustful relationship with your father?

Yes, my parents split up and my other siblings got out as soon as they could. I was the youngest and left alone with him which meant I was the subject of his abuse. My mum moved to the UK, we were in the US and eventually, she settled and I moved over but I was a troubled teenager. I dropped out of school to work full time to pay for my flight to the UK. I found the language difficult at first, despite growing up with a Cornish mum!

You fell in love when you were very young?

Yes, I met my wife in a homeless hostel, she was visiting a mutual friend and wanted to pinch some baccy from me.  As soon as I opened the door, I knew she was the one. I had been going through a suicidal time but after I met her I didn’t want to die anymore.

How is your family life now?

We have two children and everything is a lot better. My wife is free of psychosis. I am well supported by abob. Our eldest is doing well on his GCSEs and doing freelance music, and our youngest will be starting full-time in reception soon. I have found my life’s purpose through abob. I can clearly express vulnerability and be open now.  I’m generally happier. I was a very angry man, it dominated my life and put a strain on relationships and friendships. I’m getting better at expressing my emotions in a healthy way.. though I know there is still a LOT of work I need to do on myself.

And you are mentoring young men now?

Yes, I mentored one young man and am eager to do more. I feel like I am useful in society and that’s so important for me. I feel alive and purposeful. Often what young men need is someone to talk to without fear of being judged or shamed, and I can be that person. I never had that when I was young so it gives me pleasure to be able to provide what I didn’t have. I want to carry on doing trainings within abob and take on more responsibility. I’ve done a lot of thinking and have decided to put myself forward to fill the role of conductor for the ABOB Penzance circle. It’s not final yet, ultimately it depends on my brothers .